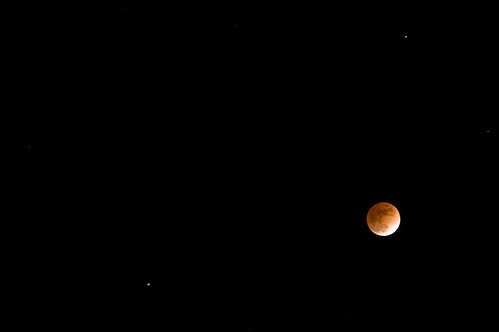 Hope you caught tonight’s total lunar eclipse, because there won’t be another one until I’m 31. Five days before Christmas of 2010 is when it will happen next.

Nearly forgetting it was happening tonight, I threw on a hat and gloves, grabbed my tripod and camera bag and headed out to my trusty Springport Rd. / Sandstone Rd. intersection a few miles northwest of Jackson, where a graveyard backs up to a large field. It’s the same place I hunted for perseids in August.

Well, I was pretty unprepared for tonight’s event, not knowing when it was to start, peak or end… nor did I have a charged battery. So, after taking one photo early on, I lost the ability to operate my camera. Assuming the eclipse was going to take only 45 minutes or so, I figured there was no use heading back to my apartment to charge my battery.

About an hour later, and yet to witness the peak of the eclipse, I decided it was worth it to return and charge my battery. So, that’s what I did. Besides, my toes and hands were freezing from the 10Â° air.

After getting some juice in my battery, I snapped a few pictures outside my apartment and then returned to try and take a few more. The return was pretty much useless because I didn’t get anything good. But it was still a fun evening. Watching the moon turn red before my eyes gave my favorite book Red Moon Rising a whole new meaning. Makes me want to read it again. And it reminds me that I’m part of the army the Lord’s raising up as an answer to the prayers of many.

As the eclipse started, and after I realized my batter was dead, I just spent some time with the Lord, taking in the beautiful, clear winter sky. I remember thinking out loud, God, how big are you?. And I then immediately saw a shooting star. Oh. That big. And I remembered that He’s the one who skips meteors across our atmosphere like we skip stones on a pond.

Tomlin’s “How Great is Our God” of course came to mind, so I broke out into some solitary worship. It’s possible a dog heard me, but I don’t think anyone else. It was a good time. I only walked away with three decent photos. You can check them out at the February 2008 Lunar Eclipse gallery on Flickr.

I watched the lunar eclipse from the warmth of my kitchen window. I had to think of Psalm 19:1-4a (AMP)
“The Heavens declare the glory of God; and the firmament shows and proclaims His handiwork. Day after day pours forth speech, and night after night shows forth knowledge. There is no speech nor spoken word [from the stars]; their voice is not heard. Yet their noice [in evicence]goes out through all the earth, their sayings to the end of the world.

You have a better camera, so your pictures are better then the one I got, but I thought it was coming back in Dec. 09, but I am prob. wrong. But I still watched it for a long time last night, darting in and out last night, in nothing but socks….I am a sucker for science, what can I say. I called lots of people to make sure they didn’t miss it! ha!

It was awesome though!

ah! neighbor, we should have coordinated on this! most of my pictures didn’t come out that swell due to my lack of tripod. :-( still, i got a few good ones.