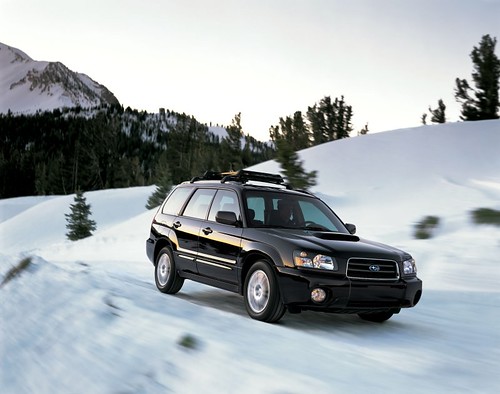 Though a few days late, I’m announcing my new vehicle: the 2004 Subaru Forester, dressed in black. Though this picture obviously is NOT my actual vehicle, it is the same make, model, year, trimline and color. I think the only visual difference would be that this one has something mounted on the roof racks and mine are bare. Though, that will change soon enough when I get something to haul bikes with. I’m guessing this one probably has a moonroof too, which unfortunately didn’t come with mine. But that and leather seats are the only options missing from mine. It’s pretty well equipped for a function-first Subaru.

I was leaning heavily toward a new 2007 Toyota RAV4 Sport or Mazda CX-7. But after months of deliberation and hours upon wasted hours of research, I wasn’t at peace with spending so much money and going the new route. And I was very frustrated with how I was letting searching for a new car influence my time management.

So, I vented my frustration to the Lord, repented of leaning on my own knowledge and understanding of what vehicle would be best for me and asked Him to help me find a vehicle at the price point I felt He laid on my heart. A few hours later, I had located the very Forester I ended up purchasing . Amazing how things fall into place when we invite Him into the fold officially rather than casually.

I got it for slightly less than the price point the Lord had targeted and it Bluebook’s for $4,000 or $5,000 more. It’s had one previous owner who took great care of it and, after 70,000 miles, has had zero non-maintenance service performed.

I’m expecting many good years and miles from it—even more than the Grand Prix gave me. And in about three years, I’ll have it paid off and be car payment free once again!

I’ve witnessed the power and majesty of Joel’s new ride. It’s beautiful. Way to go, Joel on making the decision to live within your means and listen to the Lord. Enjoy the worry-free upgrade miles in your new whip.

Cool! you can haul lots of stuff in that! My brother rented that last Thanksgiving and him and my dad took it ‘off roading’ pretty much. It was so muddy where they went that the car was mo longer blue, but had an inch of mud all over it! The picture was awesome! Just shows that the car is versatile!

Super exciting, friend! I’ve totally been keeping my eye on that car as a possible next car since I’m putting so many miles on mine w/the job. Well, I’m jealous… plus you want to put a bike rack on it… uh, double jealous. :) Did you get a bike?