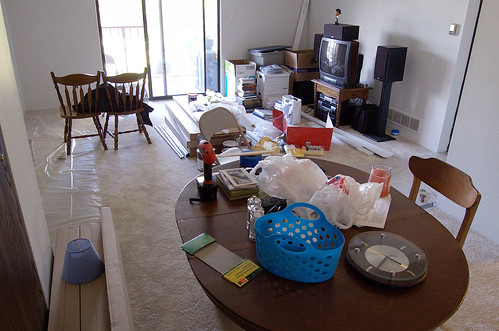 Since I’m a terribly infrequent blogger these days (I really hope to regain my voice and begin blogging more consistently, but I will promise nothing), I thought it would be good to update on something rather unimportant—my apartment.

I moved in nearly two months ago and couldn’t really afford to furnish it very well. My old roommate Scott graciously gave me many things that were collecting dust at our old house, my parents’ old table is still hanging in there and I bought a bed. But for the most part, it’s barren.

But that is all in the process of changing, thanks to a new job coming my way June 15.

Yes, that’s right. My days at Spring Arbor University are over. Sorry for not mentioning this when it was “breaking news” several weeks ago. The Reader’s Digest version is that a friend of mine at Foote Hospital, who will be my new boss, began recruiting me back in November for a Web job there. I interviewed there a few times in April and by mid-May, I had landed the job. June 1 was my last day at SAU.

The significant raise I’ll be receiving from my new employer is enabling me to by some much-needed supplies for my place. It’s getting kinda old not having a couch (yes, I could have bought a temp from Goodwill or something… I’m not complaining) or bookshelves. I’m weird in that I hate temporary solutions. I’m a do-it-once / do-it-right-the-first-time person. Therefore, my apartment has remained in a -just-moved-in state since mid-April. Though, I suppose my mindset would have been quite different had I not had this job prospect before me. I would probably have resolved myself to filling it up with local Craig’s List items.

So, I hope this chaos I’m living in with simmer down by mid-next week when my rug and couches arrive and I’ll truly be able to feel at home when I’m home.

that picture doesn’t look like chaos to me! but, i’ll trust you. is your paint color like the green on this blog?

julie tison wants you to stop taking serious shots of brides. her photographer made her do it and it made her feel dumb. Hahaha!

Let us know when things start to get in order. I’d love to see the finished/almost finished project. :)

For the record, Joel Maust earned his new position after sucessfully impressing his interviewers and demonstrating an impressive repertoire of skillz…

Question #1: The green color is more like the green of my bright green button-up shirt–the one that is the same as my bright blue one. It’s a little out of control; I’m not going to lie.

Statement #2: I don’t do any pictures a couple doesn’t want me to. I would think Julie could have done the same. Just say “No, I don’t feel comfortable doing these pictures.”

#3: I’m planning to have some sort of party mid-July. You’ll be invited, Shelby :)

the offer is still open to help be your painting huckleberry, brother! Congrats again on the new job.