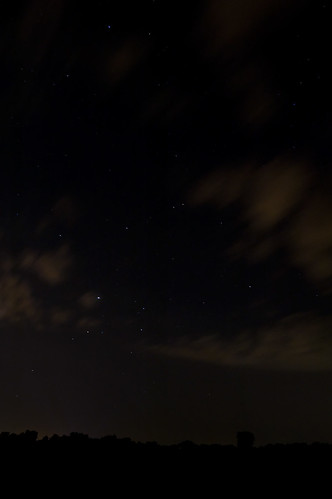 No perseids to be found

I saw quite a few perseids during the hour and a half I stargazed tonight, but none were captured by my camera with 30″ exposure times. So sad.

I would have had a slightly better chance had I done a little more research ahead of time and found out that pointing northeast—toward the constellation Perseus of all places!—increases your chances of seeing lots of perseid meteors. But alas, I didn’t know that at the time.

But that wasn’t really an option anyway, because northeast of my current best-sky-view location are trees and city light pollution. This picture points southwest, actually. Jupiter is the brightest object in the frame, sitting a few degrees above Antares of Scorpius.

As I sat and took in the sky for awhile, noticing shooting stars now and then, a bright flash to my upper right peripheral took me off guard. I jumped from my chair, wondering what it was. All that was there was a streak of light coming from some trees. At first, I thought the streak was a telephone wire bouncing some glare from a nearby property light. But, that didn’t explain the flash. As I watched it some more, the streak faded and I realized it was the remains of probably the brightest meteor I’d ever witnessed. Too bad I only caught a glimpse of it.

Sitting and watching some more, I started picturing the Father, Son and Holy Spirit having a good ol’ time with the meteor shower. To me, they were skipping stones. They’re up there throwing stones at the earth and many would skip a few times along the atmosphere—giving us our shooting stars. But every once in a while, you get that great skipping stone and throw it just right and it bounces ten or 15 times. That was the real bright shooting star I saw out of the corner of my eye. It left a bright trail behind it that lingered for a while… and the Father congratulated the Son on a great throw.

Then, low and behold, I read this article about the meteor shower when I get back to my apartment—the one I should have read ahead of time to learn which way to look in the sky. Toward the end of it is this:

There’s no need to find Perseus in the sky, though. It’s better to scan the whole sky, watching for meteors that flash past us at wider angles from Perseus. The best are called “Earth-grazers”—the ones that skip across the atmosphere like stones across a pond, often leaving long trails behind them.

Simply stunning. My revelation of the Trinity playing with Earth like a pond had been dead-accurate from a scientific-analogy perspective. Could the Lord have given me some insight into what was really going on?

Though I just said I’m surprised by nothing, this one did take me off-guard.

3 replies on “No perseids to be found (by my camera)”

and yet, the photo comes out beautifully. nice one, joel

[…] Nearly forgetting it was happening tonight, I threw on a hat and gloves, grabbed my tripod and camera bag and headed out to my trusty Springport Rd. / Sandstone Rd. intersection a few miles northwest of Jackson, where a graveyard backs up to a large field. It’s the same place I hunted for perseids in August. […]