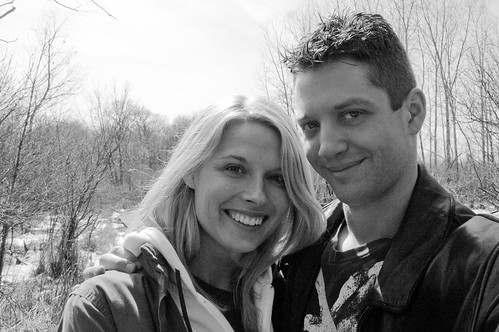 Yes: The exciting news comes a smidge late. I didn’t hit my “early next week” self-imposed deadline. But, hey, it’s worth it! Without further ado… the first picture of me with my marvelous, beautiful girlfriend, Heather!

The abbreviated story goes something like this: I was talking with my good friend Darin sometime Thanksgiving weekend and he mentioned there was some girl in the town he was living in and he “thought of me” when he met her. Mmmmeh… I didn’t think much of it, even though he said she was attractive and loved the Lord. He lived three hours from me. How was that going to work?

Well… I’ll tell you how. We became friends on the dreaded MySpace and exchanged a few–actually quite a few–messages on there. In doing so, we rather quickly discovered we were very much so on the same page spiritually. Always a good starting point, eh? We then did the e-mail thing, along with a few online chats. I secured the phone number before Christmas and we talked for the first time a few days later.

Mid-January was the first “date”, though we didn’t really call it that. And in case you’re wondering, yes, it was an entirely bizarre experience and not at all what either of us expected. But, we got over it and gave it another shot a few weeks later. That went much smoother and a few weeks later we were “official.” In case you lost track of time, those “few weeks later” add up to mid-February.

That’s my quick, blog-able version of it anyway. I’m sure her story would be different.

Anyway, since many of you won’t be meeting Heather anytime soon, I suppose you want to know a bit more about her. But since I’m not quite sure what blog etiquette is for bragging on one’s girlfriend, and since I’m a somewhat private person when it comes to these things, I’ll keep the props succinct, and slightly vague: she’s an amazing, striking woman of God :)

2 replies on “The exciting news”

I love leaving the country and coming back to super cool news like this!! YEAH!!!

Good for you…perhaps we’ll get to meet her someday (you know, on that elusive trip back to jackson we’re always meaning to take, ha)!