So, I’m nearing almost an entire month of blog negligence. But it’s been a busy month, so I’m making no apologies.

Two days after my last update, my employer switched its name from Foote Health System to Allegiance Health. The new name called for a new logo, new Web site, new marketing collateral, new just-about-everything. The Web site portion of the new stuff was basically what I was hired to do.

I didn’t work on it solid for the year I’ve been there, because there are other things I’m responsible for, but for the past few months I was pretty consumed with it. Web site launches are always big projects and this one was no exception. Thankfully, it was drama-free for the most part, unlike an SAU site launch I blogged about in the past.

With the site launch out of the way on June 20, I could enjoy the company of my parents and beautiful girlfriend for my birthday that very weekend. I had a great time biking, watching a movie, grilling, talking, eating out and just hanging out with my parents.

Heather joined us Saturday night and stayed in Jackson through Monday night so she could take me out to eat for my 29th. We hit up the Bella NottÃ©, went for a walk and then retired to the apartment before she returned to Valpo.

Even though she’d already surprised me with awesome grilling gear and a very large roll of paper (and yes, it was something I wanted. You’ll have to see my bedroom to understand), she also bought me Mere Christianity, a sweet wrist-mount GPS device and A GIANT SWORD–Aragon’s sword from Lord of the Rings, to be exact! It’s awesome and a great addition to my prayer times.

(Yes, this post is now officially of the elaborate sorts.)

Just two days later (we’re on Wednesday, June 25, now), Heather was back in town because we went to Cedar Point on Thursday for her FIRST EVER experience at America’s Roller Coast. We of course had an awesome time, even if it did sprinkle once in a while, was amazingly warm and muggy, had someone throw up close to us while in the Millennium Force line, and got mixed up on a few roads on the way back. But when you’re with someone you enjoy as much as I do Heather, all of those things become fun stories, not annoyances.

Heather was around Friday night, when we enjoyed a great message at Real Life and a post-church firefly festival in Pastor Scott’s front yard, and Saturday morning, when we enjoyed breakfast with him and Kim. Saturday afternoon Heather was on her way back to Valpo and I had a wedding photo job. Sunday, I did nothing. Whew.

The next week, I worked another three days before heading to Valparaiso for a much needed, super-long 4th of July weekend. Heather and I ventured up to a KOA near South Haven and met Scott and Julie, Iggy and Sherri, Otis and Hayley, and Clark and Erin for a weekend of camping. The weather was just perfect all weekend and we had a really good time. 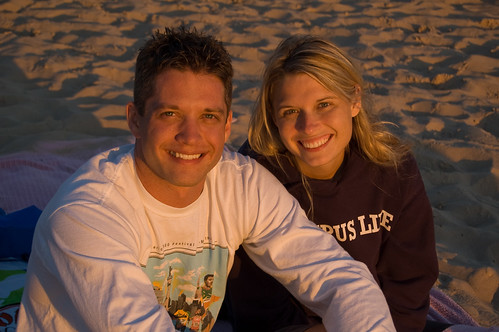 If you’ve never been to St. Joseph’s Silver Beach, I highly recommend it. That’s where we spent July 4. I wouldn’t necessarily recommend going there on the 4th because it was a madhouse, but still, it’s a great beach. Beautiful sand, lots of volleyball courts and other great amenities. The town of St. Joe is nice, too, with lots of places to eat, shop and enjoy yourself. Plus, it’s “The Most Romantic City in Michigan,” so why not visit it?!? :)

We were back in Valparaiso Saturday night so we could enjoy Sunday at Bethel (Heather’s church) and another day on the beach with her friends Sarah and Josh. And Sunday night was the much anticipated dinner at House of Kobe–an excellent Japanese steakhouse. If you ever visit, just be sure to properly articulate you want the “Samurai” (New York Strip) lest you be given salmon (which is also very tasty, by the way).

After sleeping in a good long while on Monday, we spent the afternoon with Heather’s parents and grandmother. Leaving Heather in Valparaiso, knowing that our run of seeing each other 12 out of 16 days was over, was pretty tough, that’s for sure. It was awfully nice being able to spend so much time together after doing short two or three day stints every couple weekends the past five months.

So there you have it: my big update. Life’s kinda back to normal now: work has slowed down, travels have slowed down… Things are good; things are moving along. God has me in an interesting place, but that’s for another time. Now, I’m going to get in a little more reading before bed.

Glad to hear things are going good in your neck of the woods…I’m jealous of you guys all camping together! =) Phil and I have only been out a couple times this year, but it’s awesome every time we get to camp. I’m due on September 12 and we set our last camping trip of the season for Labor Day week-end (close to home, of course). This one will pop out addicted to s’mores! =)