There are times I’m tempted to think God isn’t that big. Or isn’t at all. So, this is a reminder to me and any of you who share in the battle. 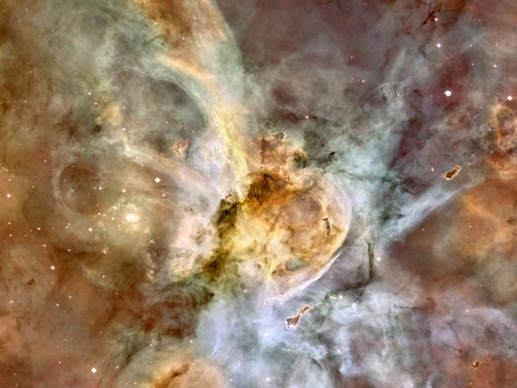 In celebration of the 17th anniversary of the launch and deployment of NASA’s Hubble Space Telescope, this, one of the largest panoramic images ever taken with Hubble’s cameras, is being released. It is a 50-light-year-wide view of the central region of the Carina Nebula where a maelstrom of star birth – and death – is taking place.

This image is a mosaic of the nebula assembled from 48 frames taken with Hubble’s Advanced Camera for Surveys. The images were taken in the light of neutral hydrogen. Color information was added using data from the Cerro Tololo Inter-American Observatory in Chile. Red corresponds to sulfur, green to hydrogen, and blue to oxygen emission.

The fantasy-like landscape of the nebula is sculpted by the action of outflowing winds and scorching ultraviolet radiation from the monster stars that inhabit this inferno. In the process, these stars are shredding the surrounding material that is the last vestige of the giant cloud from which the stars were born.

The immense nebula contains at least a dozen brilliant stars that are estimated to be 50 to 100 times the mass of our sun. The most unique and opulent inhabitant is the star Eta Carinae, which is in the final stages of its brief and eruptive lifespan, as evidenced by two billowing lobes of gas and dust that presage its upcoming explosion as a titanic supernova.

The fireworks in the Carina region started three million years ago when the nebula’s first generation of newborn stars condensed and ignited in the middle of a huge cloud of cold molecular hydrogen. Radiation from these stars carved out an expanding bubble of hot gas. The island-like clumps of dark clouds scattered across the nebula are nodules of dust and gas that are resisting being eaten away by photoionization.

You can see a new image from NASA every day.

Thanks Joel. God does good work

I love the Hubble! It is really refreshing to get an expanded view of just how ENORMOUS God is.

Years ago Stuart Hamlin wrote a song entitled How Big Is God.
The chorus ended with “He’s big enough to rule this mighty universe, yet small enough to live within my heart.”
How thankful I am that He loves me enough to give me beauty and magnificence all around me and would want to live in my heart.